Within the first week in January the Mustadafin Foundation, an NPO in partnership with the city’s disaster management, was running up and down in the early hours of the morning through late nights providing relief to those who lost their belongings in fire. A total of over 5000 structures in the city of Cape Town were damaged or destroyed by fires between Jan and Dec, affecting 14374 people and claiming the lives of 97 people.

In partnership with CPUT the foundation introduced  the gel stove in the township of Kosovo as an intervention to reduce the amount of fire incidents that are caused by paraffin stove.150 cost effective, healthier and safer stoves were issued to the Blankets, 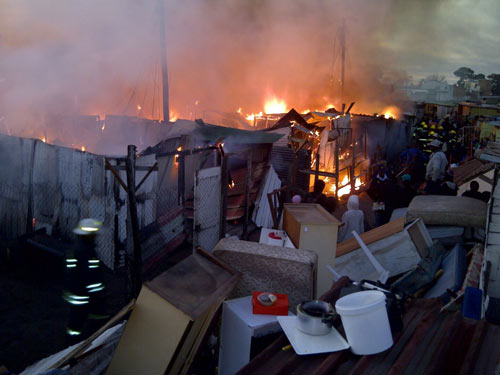 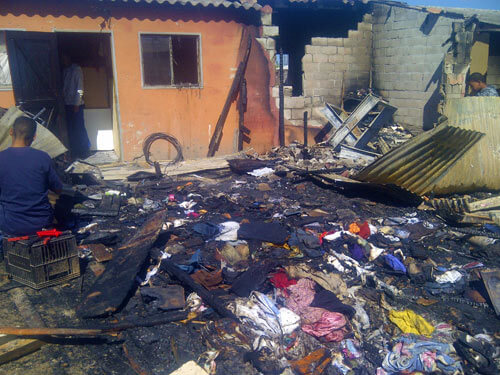 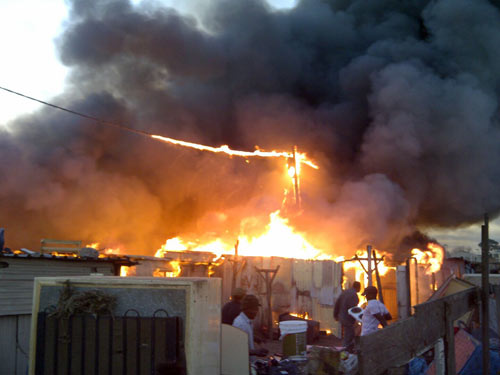 A FIRE wreaked havoc, leaving a trail of destruction through Masiphumelele, near Kommetjie, in the early hours yesterday, killing two people, destroying about 800 structures and leaving more than 4 000 people homeless.

Firefighters, who struggled for five hours to extinguish the blaze because the houses were built too closely together, could not save Xolisani Ketse and his girlfriend, Thembisa Jerry, both of whom were trapped inside their wooden structure.

Bukelwa Gaca, whose house adjoined the one in which Ketse and Jerry lived, said she had lost everything, including her clothing, furniture and money.

Gaca said she was concerned about the welfare of her five-year-old daughter Zubenathi and her nephew Sibusiso, also five – although she was extremely relieved that they had escaped the blaze unscathed.

She said her plans to spend her holidays in the Eastern Cape with family had been ruined.

“I woke Xolisani and his girlfriend and I thought they had left the house. I was shocked when their bodies were discovered inside the structure. What happened is sad,” she said.

Nkosinathi Khuba, 40, who suffered minor burn wounds on his arms, said he managed to save some clothing and furniture. He said it was the second time in two months that he had become a victim of a fire in the settlement.

On October 21, his house was partially damaged in a blaze that also damaged or destroyed 300 other houses.

“Every now and then this place experiences a fire. It’s like it is cursed,” he said.

After the fire, Pick n Pay announced that it had placed donation trolleys in its stores at Long Beach Mall, in Tokai and in Constantia Village for those who wished to donate non-perishable food and clothing to the fire victims.

Pick n Pay said it had also donated R20 000 towards disaster relief and was working with City Disaster Management.

Police spokesperson Frederick van Wyk confirmed the deaths of Ketse and Jerry. He said an inquest docket had been opened.

Social Development MEC Albert Fritz said the fire was one of the worst in the province this year. “Of great concern is the rise in the number and severity of incidents of fires at informal settlements.”

This past weekend alone there had been three other fire incidents. A total of 56 houses were destroyed by a fire in Nkanini in Khayelitsha.

In Joe Slovo informal settlement in Langa, a 41-year-old died and 125 houses were destroyed, leaving about 500 people homeless. In Bloekombos in Kraaifontein, a fire destroyed one house.